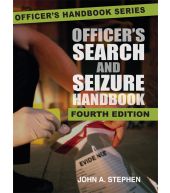 This handy and portable guidebook includes an annual update to case summaries relevant nation-wide on the topics of search and seizure.

An indispensable, nuts-and-bolts guide on the application of the Fourth Amendment to everyday police work, Search and Seizure Handbook is as invaluable to veteran officers as it is to officers new to the force. Inside you'll find the critical coverage you need to guide you through the potential pitfalls of nearly any investigative scenario. Expert topical coverage brings you the blackletter law and practical advice on:

John A. Stephen earned his B.S. in Business Administration from the Whittemore School of Business and Economics at the University of New Hampshire in 1984 and his J.D. cum laude from the Detroit College of Law (now the Michigan State University School of Law in Lansing, Michigan) in 1987. He clerked for Judge Martin F. Loughlin at the United States District Court for the District of New Hampshire, and then served as an Assistant County Attorney for Hillsborough County, New Hampshire. He served as an Assistant Attorney General at the New Hampshire Department of Justice from 1992-1998, where he was the Director of the DWI Unit, prosecuted numerous homicide crimes and regularly appeared before the New Hampshire Supreme Court in criminal appeals.

Mr. Stephen served as Assistant Commissioner of the Department of Safety from 1998 to 2003. He assisted the Commissioner's oversight of the Divisions of State Police, Motor Vehicles, Safety Services and Fire Standards and Training, and was directly responsible for the Division of Fire Safety and Emergency Management, including the E-911 Bureau. He served as the Commissioner's designee on numerous Commissions and Committees, and served as the State's Coordinator of Homeland Security. He was responsible for a key agreement between the Departments of Safety and Health and Human Services consolidating emergency preparedness responsibilities and centralizing hospital bioterrorism funding. He served as Commissioner of the Department of Health and Human Services from 2003-2007, administering Medicaid, elder services, financial assistance, mental health, disabilities, drug and alcohol, public health, child support, juvenile justice and child protective services, and other important programs. He ran for Governor of New Hampshire in 2010.

Mr. Stephen frequently lectures local and state police and prosecutors on various legal and homeland security-related issues, including search and seizure and constitutional law. He has taught criminal procedure, search and seizure, DWI apprehension and detection, accident reconstruction and drug recognition at the New Hampshire Police Standards and Training Police Academy. He has also been a guest lecturer at Babson College in Massachusetts, and is on the faculty at the New Hampshire Community Technical College, where he teaches criminal procedure. He is a prolific author, having co-authored The Officer's DUI Handbook, Courtroom Survival: Making the Traffic Officer a Powerful Witness and Investigation and Prosecution of DWI and Vehicular Homicide. He is also the author of the Officer's Search & Seizure Handbook, the Officer's Arrest Handbook and the highly regarded New Hampshire DWI Manual.

Mr. Stephen is married and has two children.

2-1. What Constitutes a Search under the Fourth Amendment?

2-2. What Constitutes a Seizure under the Fourth Amendment?

2-3. Does the Search and Seizure Involve a Government Agent?

2-4. Who Is Protected by the Fourth Amendment?

3-3. Probable Cause: What Is Sufficient Information to Justify a Search or Seizure?

3-8. Exceptions to the Exclusionary Rule

3-10. Particularly Describing the Persons or Things to Be Searched

3-13. A Short Course in Grammar and Power Writing

5-3. What Constitutes Specific and Articulable Facts

5-4. Stopping and Frisking a Citizen

5-5. Scope of the Stop and Frisk Search

5-10. Temporary Detention Based on Reasonable Suspicion

5-11. Ordering Passengers Out of Vehicle