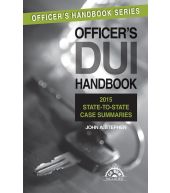 Practical advice for police officers about how to handle the arrest, investigation, and trial of an individual found guilty of driving under the influence of alcohol.

Special Note: Now this Handbook has become even more useful, with an annual supplement containing State-to-State Case Summaries by John A. Stephen.

This handbook contains practical advice for police officers about how to handle the arrest, investigation, and trial of an individual found guilty of driving under the influence of alcohol. It is written by three leading attorneys with extensive experience in criminal and DUI matters.

Here are some of the tips you will find inside Officer's DUI Handbook:

Find out how courts have handled cases similar to yours with new case examples, which can be used in training or on the road. Plan your strategy based on these court rulings, which illustrate patterns derived from actual cases around the country. Use the citations following each case to further investigate a topic that interests you.

John B. Kwasnoski is a Professor Emeritus of Forensic Physics at Western New England College. He has completed more than 500 accident reconstructions and testified throughout the country in criminal and civil cases, including the Susan Smith case in Union, South Carolina. He has written extensively on accident investigation and trial techniques and has lectured nationwide before police officers on DUI issues.

John A. Stephen earned his B.S. in Business Administration from the Whittemore School of Business and Economics at the University of New Hampshire in 1984 and his J.D. cum laude from the Detroit College of Law (now the Michigan State University School of Law in Lansing, Michigan) in 1987. He clerked for Judge Martin F. Loughlin at the United States District Court for the District of New Hampshire, and then served as an Assistant County Attorney for Hillsborough County, New Hampshire. He served as an Assistant Attorney General at the New Hampshire Department of Justice from 1992-1998, where he was the Director of the DWI Unit, prosecuted numerous homicide crimes and regularly appeared before the New Hampshire Supreme Court in criminal appeals.

Mr. Stephen served as Assistant Commissioner of the Department of Safety from 1998 to 2003. He assisted the Commissioner's oversight of the Divisions of State Police, Motor Vehicles, Safety Services and Fire Standards and Training, and was directly responsible for the Division of Fire Safety and Emergency Management, including the E-911 Bureau. He served as the Commissioner's designee on numerous Commissions and Committees, and served as the State's Coordinator of Homeland Security. He was responsible for a key agreement between the Departments of Safety and Health and Human Services consolidating emergency preparedness responsibilities and centralizing hospital bioterrorism funding. He served as Commissioner of the Department of Health and Human Services from 2003-2007, administering Medicaid, elder services, financial assistance, mental health, disabilities, drug and alcohol, public health, child support, juvenile justice and child protective services, and other important programs. He ran for Governor of New Hampshire in 2010.

Mr. Stephen frequently lectures local and state police and prosecutors on various legal and homeland security-related issues, including search and seizure and constitutional law. He has taught criminal procedure, search and seizure, DWI apprehension and detection, accident reconstruction and drug recognition at the New Hampshire Police Standards and Training Police Academy. He has also been a guest lecturer at Babson College in Massachusetts, and is on the faculty at the New Hampshire Community Technical College, where he teaches criminal procedure. He is a prolific author, having co-authored The Officer's DUI Handbook, Courtroom Survival: Making the Traffic Officer a Powerful Witness and Investigation and Prosecution of DWI and Vehicular Homicide. He is also the author of the Officer's Search & Seizure Handbook, the Officer's Arrest Handbook and the highly regarded New Hampshire DWI Manual.

Mr. Stephen is married and has two children.

Gerald N. Partridge is a retired career prosecutor who served four terms as County Attorney for Washington County, Iowa and is widely recognized as one of the finest trial advocacy instructors in the nation. He is the Executive Director of Legal Sciences, Inc., a company that creates monthly computer-based police training lessons. He teaches witness preparation and cross examination for police and prosecutor agencies across the country, including the National College of District Attorneys.

Chapter 1: Elements of the Offense Chapter 2: Detection, Apprehension and Investigation

Chapter 3: Implied Consent and the Administration of Chemical Tests

Chapter 5: Building the Shield Against Defense Motions: A Roadmap for DWI Crash Investigations

Chapter 7: How to Testify: Bringing the Investigation into the Courtroom