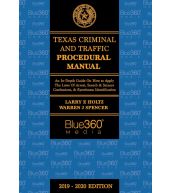 Authors Holtz and Spencer take an innovative approach to the study and practical application of the cases and statutes for the laws of arrest, search and seizure.

Larry E. Holtz has served the City of Atlantic City as a police officer, detective, sergeant and police attorney, where he earned over fifteen departmental commendations. He later served as an Assistant County Prosecutor and New Jersey Deputy Attorney General. During his tenure at the Attorney General’s Office, Law Enforcement, Legal Affairs Section, he co-authored the State’s Charging Manual, various Attorney General Guidelines and was the Executive Editor of the Division of Criminal Justice Law Enforcement Reporter.

Mr. Holtz has also served as a municipal prosecutor for three towns in South Jersey, the Director of the Cape May County Police Academy, and as adjunct professor at Widener School of Law and Rowan University. He is a member of the bar in New Jersey, Pennsylvania, and the District of Columbia.

Mr. Holtz has unmatched experience in the field of law enforcement, police training and instructor/teacher development. Over the past 30 years, he has designed and conducted basic, in-service and advanced training programs at various police academies and prosecutors’ offices throughout New Jersey and Pennsylvania. He has also designed and conducted advanced education seminars for New Jersey judges, attorneys, and professional educators.

Warren J Spencer began his career in law enforcement as a police officer
with the Irving Police Department. Mr. Spencer last served in a regular
capacity as a captain with the Sunset Valley Police Department. Mr. Spencer
currently serves as a reserve police officer with the town of Addison, Texas,
where he assists with administrative matters, including policy development
and training.
Mr. Spencer obtained his Bachelor’s Degree from the University of Texas
at Arlington, his Master’s Degree from Texas Christian University and his
Jurist Doctorate from the University of Texas School of Law. Upon graduation
from law school, Mr. Spencer served as an Assistant District Attorney with the
Tarrant County District Attorney’s Office. Mr. Spencer has also served as the
Assistant Legal Advisor for the Arlington Police Department and as the Senior
Legal Advisor for the Plano Police Department.
Mr. Spencer has been actively training police officers at all levels throughout
the state of Texas for the past 23 years. He has worked with TCOLE as a
consultant to update the legal curriculum requirements for Texas police officers.
Mr. Spencer serves as a consultant for the Texas Police Chiefs Association
and writes a criminal procedure newsletter that is published monthly by the
Association.
Mr. Spencer currently serves as the legal advisor for the Frisco Police
Department and as the city attorney for three Metroplex municipalities. Mr.
Spencer also instructs at the ILEA police command college in Plano and the
North Central Texas Regional Police Academy in Arlington, and as an adjunct
professor of criminal justice at Tarleton State University.
Mr. Spencer is a member of the Bar in Texas.