The Ideal Employee, Understanding and Dealing with Personality Tests 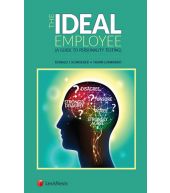 The Ideal Employee, Understanding and Dealing with Personality Tests

A significant and fast growing trend in both the private and public sector hiring and promotion processes is the use of Personality Tests as a screening device to help employers select those who are hired and/or promoted.

PRODUCT DESCRIPTION
A significant and fast growing trend in both the private and public sector hiring and promotion processes is the use of Personality Tests as a screening device to help employers select those who are hired and/or promoted. These tests require candidates to state their agreement or disagreement with a series of statements designed to identify those candidates with the universal core values possessed by Ideal Employees. However, due to the lack of helpful information surrounding these Personality Tests many otherwise qualified candidates are rejected because they do not understand the process. This misunderstanding often leads them to select inappropriate responses to the statements they are being asked to evaluate and that subsequently results in their not getting the job or promotion for which they are applying.

This publication – "The Ideal Employee, Understanding and Dealing with Personality Tests" – strips away the mystery surrounding Personality Tests. This text guides candidates for entry level and/or promotional positions by helping them understand what the personality traits of Ideal Employees are and how these traits come together to build the core values required of an Ideal Employee. Throughout the text, candidates are provided with exercises that guide them in adopting and adapting these personality traits and core values for themselves in order to get the job or promotion they are seeking. In other words, readers of this book will be guided as to when to agree and when to disagree with Personality Test statements.
ABOUT THE AUTHORS

Frank Lombardo is a retired Deputy Inspector of the New York City Police Department who has also worked with the San Francisco Police Department with assignments that included patrol, vice/narcotics criminal investigations, and staff assignments such as personnel. His classroom experience consists of teaching at John Jay College of Criminal Justice and St. John's University. The coauthor of several texts on police entry and promotional exams, he has been a consultant to civil service agencies in the writing, administration, and scoring of exams. Currently engaged in the tutoring of candidates for police promotion

Dr. Donald Schroeder holds a Ph.D. in Criminal Justice. He is also a retired Police Captain, having held both field and staff assignments in the New York City Police Department. One such staff assignment involved his acting as police liaison from the New York City Police Department to the Educational Testing Service of Princeton, New Jersey. He has taught criminal justice subjects at John Jay College and has co-authored several texts on police promotion. Dr. Schroeder has acted as a consultant to governmental personnel agencies throughout the country, assisting them in the preparation, administration, and evaluation of criminal justice promotional examinations. At the present, Dr. Schroeder provides assistance to individuals and study groups competing in management assessment exercises.

A Message From Your Authors

How to Best Use This Book

Chapter Sixteen: The Week Before Your Test